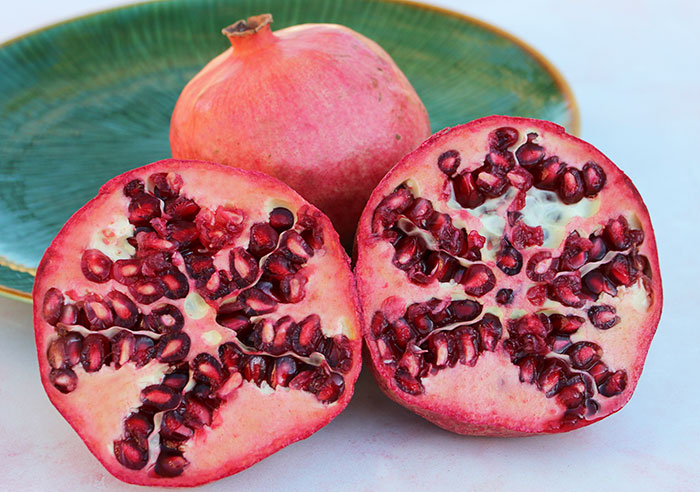 Pomegranates are an ancient fruit variety on the list with others like figs, grapes, dates and olives. Native to Persia or modern-day Iran, the Punica granatum species has been widely grown and consumed in regions of the Middle East as well as locations spanning from the Mediterranean to North India.

One single pomegranate can in fact yield over 600 flesh coated seeds, depending on the cultivar. We counted 698 in one deseeded large pomegranate. This quality has made them a symbol of fertility, abundance and prosperity in numerous cultural customs and folklore.

Pomegranate is known as one of the top biblical fruits and is referenced in many religious texts and literary writings of the world. The image of the pomegranate has likewise been used as a source of inspiration throughout global history in art, paintings and architecture.

Wild pomegranate trees are believed to have originated in the Kopet Dag mountain range, bordering Turkmenistan and Iran, and are identified as one of the first domesticated fruits in the eastern Mediterranean.

Punica granatum is a small deciduous shrub or tree with pale to bright red-orange blossoms.  The calyx and dried stamens on the top part of a pomegranate are actually where the flower was originally located. Upon closer observation, one can see that the fruit isn't completely round but has an obscure usually 6-sided shape.

As far as fruits go, pomegranates are quite unique by design. On the inside, there is a thick spongy mesocarp layer with seeded fruit grouped in clusters within non-symmetrical chambers. These sections are separated by an inedible thin cream-colored membrane.

The fruit or "pomegranate seeds", as they are frequently called, are seed pods referred to as ARILS, defined so because the translucent fruit pulp surrounds a small white seed. Botanically speaking, they are technically considered berries.

While the outside rind of pomegranate fruit can have a worn and less aesthetically attractive appearance, when the peel is removed the juicy red arils are quite appealing, like shiny jewels or rubies.

Arils can be eaten fresh, pressed to make juice or dried as in the East Indian spice known as anardana. Pomegranates are a seasonal fruit variety and typically available in the fall and winter.

How to Deseed Pomegranate

Pomegranates can be a rather awkward and messy fruit to open. There is however a common technique used to extract the arils that make the process a bit easier.

In a nutshell, the traditional method involves the following steps: 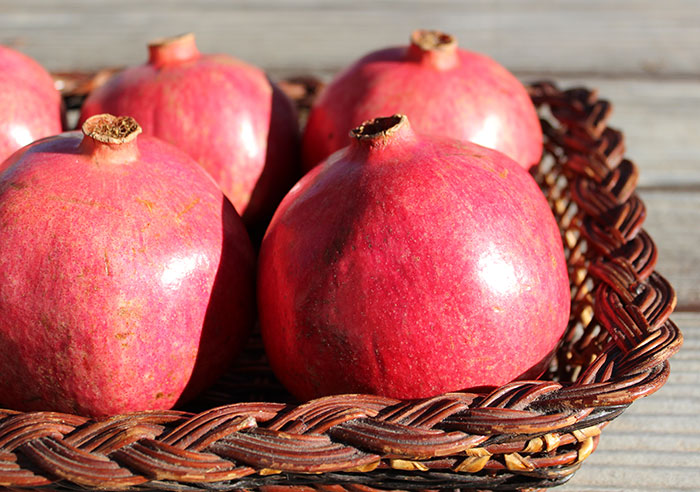 In many parts of the world whole pomegranate arils are used in chutneys, salads or as a garnish to meals. From our experience, when eating them as a fresh fruit, it is also a common practice to spit out the seeds after the sweet-tart juice surrounding them is consumed. This is because the seeds inside the fruit pod can be tough to thoroughly chew, digest and are typically less appetizing to eat.

These white seeds do have some nutritional value, however, so making pomegranate juice can extract some of their beneficial components.

Juicing pomegranate fruit has in fact been a long-time popular way to consume it in the Middle East, India and Europe. Commonly utilized in alcoholic beverages, such as cocktails and wine, it is also the main component to original grenadine syrup recipes, often served with mocktails like the classic nonalcoholic drink known as the Shirley Temple.

A ripe pomegranate will produce a juice that is sweet with some astringency and a slightly sour taste because of its lower pH of about 4.4. 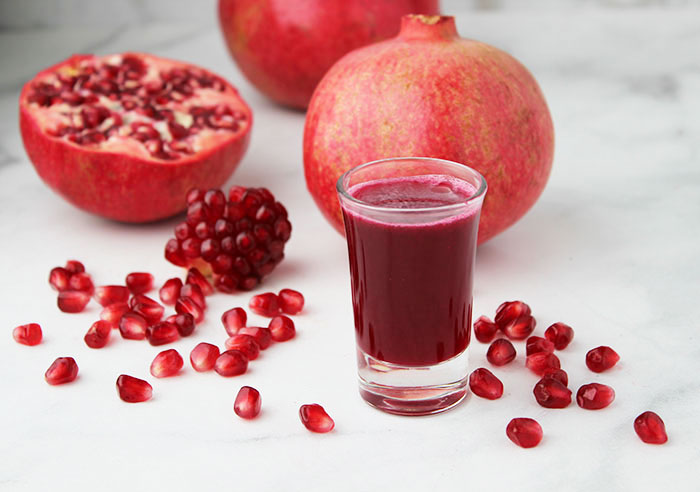 Our Favorite Way to Juice Pomegranates

Instead of using a juicer, we like to blend about one cup of seeds with about one cup of water in a high-speed blender, then strain out the hard seed bits through a large-mesh strainer. This way you'll get some of the fiber they contain minus the less palatable portion.

The added water will also help to dilute the high sugar content. You can also add fresh juice to smoothies, other blended drinks or kefir, to reduce its overall glycemic index.

Pomegranate is a major source of health-promoting antioxidants, specifically the class of polyphenols known as flavonoids and tannins.

The flavonoids in pomegranate fruit include anthocyanins, flavonols, flavones and the flavan-3-ol known as catechin.

ANTHOCYANINS are water-soluble red-purple plant pigments that give the fruit arils their deep color and are also present in a number of other fruits and super fruit varieties, such as cherries, purple grapes, cranberries, blueberries, maqui and acai.

Anthocyanins are known to act as antioxidants as well as inhibit compounds that cause inflammation in the body. Pomegranates can be another healthy colorful fruit option to include in the diet.

The group of flavonols called CATECHINS, also found in high amounts in matcha, cacao and blackberries, are one of the particular antioxidants in pomegranates often discussed. (*)

The main polyphenolic tannins in pomegranate fruit include ellagitannins and pomegranate is known for one unique ellagitannin in particular known as PUNICALAGIN. The juice has the highest concentration of punicalagin which is hydrolized to ellagic acid in the human intestine.

While some earlier scientific publications report that pomegranate juice has a higher antioxidant activity than red wine or green tea, one of the original study's using commercial juice that these claims were in fact based on, utilized the whole fruit with the skin included. The thick leathery skin is very concentrated in antioxidant compounds, but for human intake is largely inedible.

Therefore, even though pomegranates are considerably high in these health-enhancing components, we speculate that the juice produced from the seed pods themselves would be less concentrated.

Pomegranate, however, is available as a supplement extract by a handful of suppliers. These products are usually standardized to contain a certain percentage of ellagitannin or ellagic acid content of about 40%. You may also choose to use freeze-dried juice powders which can help concentrate the benefits of pomegranate fruit.

Another good reason to consume the internal white seeds, as well as the juicy layer surrounding them, is that they are a source of PUNICIC ACID, a main active ingredient in pomegranate seed oil. (Source)

The oil is sometimes sold as a cold-pressed pomegranate seed oil for its health and beauty aspects, but pomegranate juice pressed from arils will also extract some of these beneficial nutritive compounds.

Punicic acid, along with polyphenolic antioxidants ellagic acid, caffeic acid and luteolin are the main substances studied for their proposed support to prostate function.

For this reason, some supplement products optimized for prostate health incorporate freeze-dried pomegranate and seed oil into their formulas with other herbs like saw palmetto and nettle root.

Keep in mind that more scientific evidence is needed on pomegranate and its influence on the male prostate. In a 2017 review of a placebo-controlled trial using pomegranate juice and extract for such purposes, it appeared to benefit patients with "the MnSOD AA genotype", but no significant improvement on male patients with reoccurring prostate disorders was observed.

The antioxidants in pomegranate have been shown in some research to have an anti-hypertensive and anti-atherosclerotic influence that might encourage a protective impact to the cardiovascular system. (*)

Pomegranate, and specifically its juice, are consequently believed to be a heart-healthy option to consider adding to a balanced diet for its potential positive activity on blood pressure and cholesterol levels.

As always, it is best to consult your physician before consuming it on a regular basis if you have high blood pressure, heart-related conditions or are taking prescribed medications for such purposes. 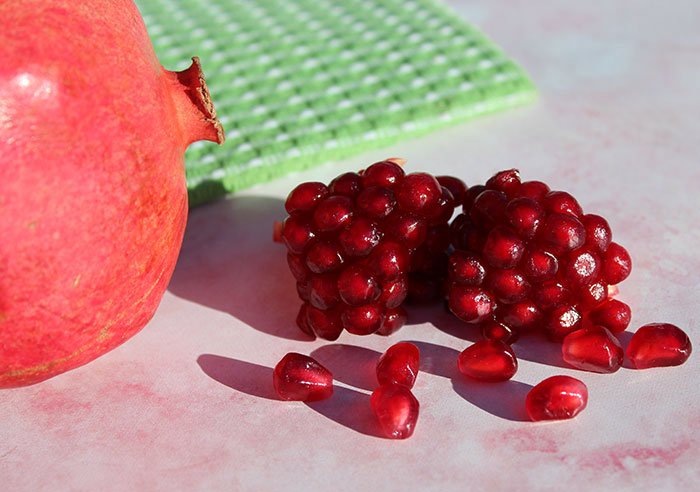 Vitamin C is also a type of antioxidant and pomegranates generally contain higher amounts. Some nutrition data reports an 1/2 cup of pomegranate seeds has about 8.9 mg VITAMIN C or 15% the Daily Value, based on a 2,000 calorie adult diet. Of course, freshly pressed juice will have an increased quantity. Note, however, that most commercial pomegranate juice is pasteurized which can significantly reduce vitamin C levels.

Other superfruits known to be high in VERY high vitamin C include acerola, camu camu, amalaki, sea buckthorn and kakadu plum. These are commonly taken as a powdered concentrate, rather than a straight fruit or juice.

Consuming natural whole food-based vitamin C can be a valuable adjunct to a health-promoting diet and is an essential nutrient needed for many bodily functions. It's not only an immune-boosting antioxidant, adequate levels of vitamin C are a necessary component of collagen production which supports healthy tendons, eye tissues, ligaments, bones and joints.

Along with vitamin C, pomegranate fruit is also a good source of vitamin K, folate, copper, potassium and manganese with trace amounts of other vitamins and minerals. (*)

One large pomegranate will usually yield about a full cup of seed pods, but this can vary depending on the cultivar. These arils can be juiced, eat fresh or dried and powdered.

When consumed raw they are often used on salads or as a garnish to meals and desserts. The juice is great poured over yogurt or blended into kefir or a smoothie recipe.

Pomegranates are a seasonal fruit and usually available in most markets in the fall and winter season. We have found that when selecting the best pomegranates, the fruits that are a paler red-pink color with a weathered look can sometimes have the juiciest arils with a deep red-purple pigmentation.

Often the best time to harvest a fresh pomegranate is after it cracks open on the tree, a true sign that its ripe and ready.

Always seek the advice of your physician or healthcare provider before adding pomegranates or pomegranate juice to the diet, especially when pregnant, nursing, taking prescription medications or if you have a serious medical condition. 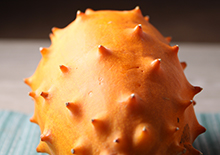 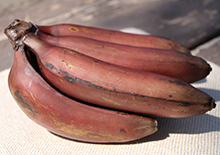