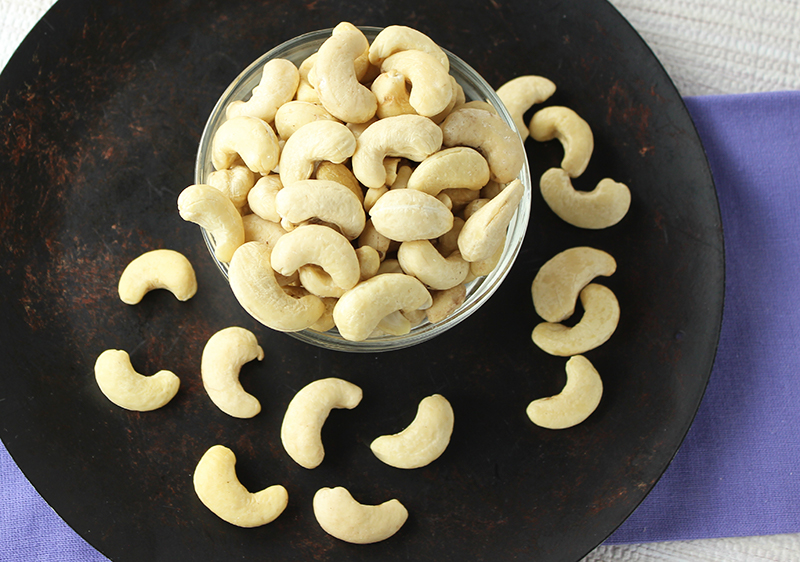 Cashew nuts are curved half moon-shaped kernels typically a light yellow or ivory color when unroasted. Native to the tropical Amazonian climates of Brazil and Venezuela, they have long been grown and utilized throughout Latin America.

The cashew tree was introduced by the Portuguese colonists in the 16th Century to parts of India, especially Goa. It was then spread across the Indian Ocean to regions of Africa such as Mozambique, which was once a leading producer.

Cashew cultivation is likewise common in areas of Southeast Asia like Indonesia and the Philippines. Most commercial cashews today come from Vietnam, India and the Ivory Coast.

Also called caju in Portuguese and anacardo in Spanish, cashews (Anacardium occidentale) are in the same family as sumac, mango, pistachio and poison ivy.

2 Unique and Interesting Facts About Cashews

1) Cashews Grow Different Than Other Nuts

Cashews grow a bit different than other types of nuts. They are botanically speaking actually "seeds" that, instead of growing inside the fruit, hang from the bottom of it. 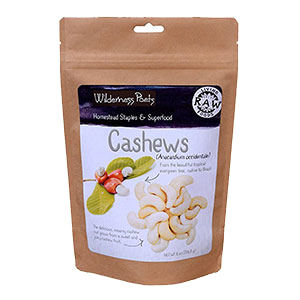 Encased within a hard shell, the cashew nut grows at the end of the yellow or reddish fruit called a cashew apple. Although considered an accessory fruit, it is edible and utilized in many cashew-growing countries.

In both Goa and Mozambique, the cashew apple is used to make an alcoholic beverage, called Feni in India and Muchekele in Africa.

2) Cashews are Always Shelled and Most All are Heat Treated

Unlike other nuts, such as walnuts, pistachios and Brazil nuts, cashews are never sold enclosed in their shells. This is because the shell layer contains a caustic resin that needs to be removed to make them edible to eat. This substance is related to toxic urushiol oil also found in poison ivy.

Unshelled cashews are therefore roasted, high-pressure steamed and cracked to remove the shell oil, called cashew nutshell liquid (CNSL). The kernel inside the shell is covered by a testa (or husk) which is peeled to reveal the cashew nut.

While the term "raw" cashews is often used commercially, 99% of all cashews are heat treated. However, a raw cashew does not go through further roasting techniques like nuts that are labeled "roasted" or "dry roasted", which is a common practice.

A very small percentage are considered "truly raw" cashews as they undergo non-heat processing by freezing and stabilizing the oil in the shell for easy removal. 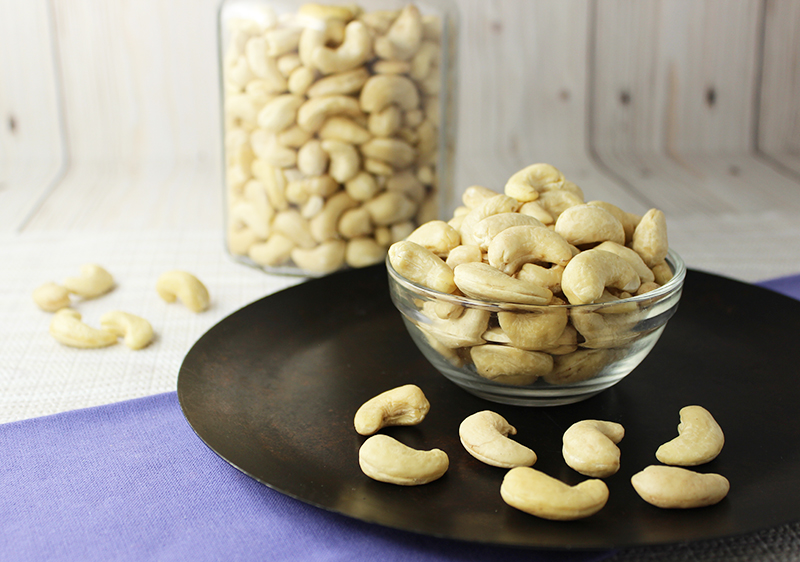 What are 4 Benefits of Cashew Nuts?

1) One of the Best Tasting Nuts

Cashews are probably one of the world's most favorite nut varieties, neck in neck with pistachios. This is likely due to their crunchy yet buttery texture and sweet flavor.

The ideal combination of fat to carbohydrate ratio is basically what accounts for its favored taste profile. Cashews are a high-carb food and mostly composed of simple sugars and starch rather than dietary fiber.

While compared to other nuts, they aren't significantly high in fat, cashews provide the perfect creamy consistency and mouthfeel. Cashews and pistachios are actually in the lower range at about 46% fat, while macadamia nuts average in the higher range at about 76% fat. (Source) They have a moderate amount of protein, about mid-range compared to other nuts and seeds.

Although the cashew on its own is nothing like dairy, when soaked and blended it makes a thick and creamy milk. This is because cashews contain a good amount of STARCH content which increases its viscosity. 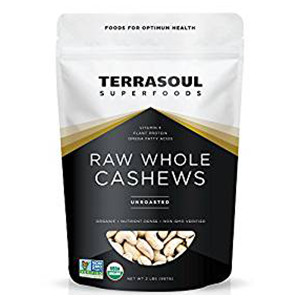 One ounce of raw cashews contains about 9.2 grams of carbohydrates. Of this total, they have approximately 1.7 grams of sugar, only 0.9 grams of fiber and a whopping 6.6 grams of starch. This is by far one of the highest in total starch than any other seed or nut type.

In a culinary sense, their versatility when making plant-based dairy products is unsurpassed by any other nut variety.

As a result, raw unsalted cashews have become a go-to nut when making nut milk, nut & seed cheeses as well as no-bake cheesecakes and other desserts like vegan ice cream. If you're wanting to make a dairy-free cheese sauce or gravy, cashews are often a preferred selection. 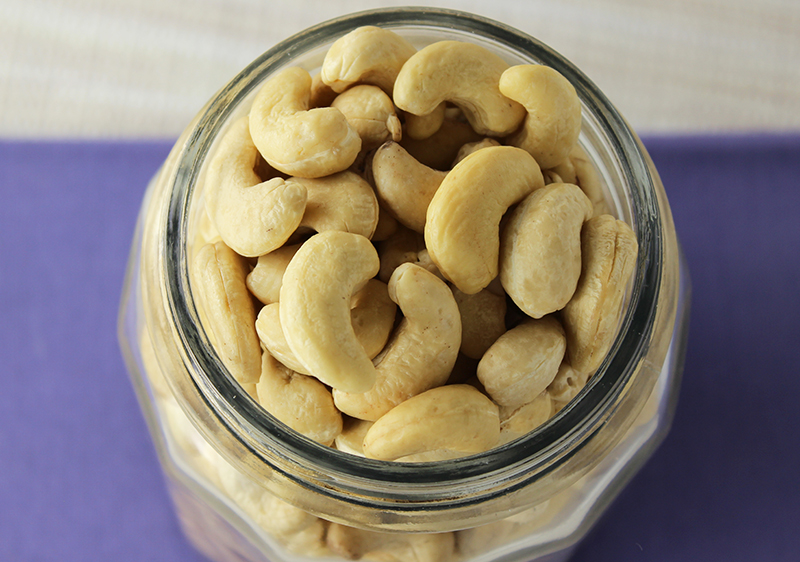 3) Cashew Nuts are High in Copper

Cashews are known to contain a significant amount of the mineral COPPER, with one ounce coming in at approximately 0.6 mg, 31% the Daily Value for copper (based on a 2,000-calorie adult diet). They are the second highest next to sesame seeds.

Usually, about 16-18 cashew nuts are equivalent to about a one ounce serving size.

The benefits of cashews and their copper nutrient may be helpful for the formation of red blood cells as well as for the absorption and synthesis of iron.

Copper is also important for various enzymatic reactions, bone maintenance and is a necessary nutrient for tissue repair as it stimulates immune functions and is involved in elastin and collagen development beneficial to the skin. (*) Copper is one of the trace nutrients that play a role in the production of enzymatic antioxidants.

4) Benefits of Cashew Nuts for a Heart Healthy Diet

Cashews are considered to be a heart healthy option to include in a health-promoting diet. That's because they are rich in MONOUSATURATED FATS, like oleic and palmitoleic acids, that are linked to reducing LDL cholesterol.

Another nutrient they are especially high in is the plant sterol known as BETA-SITOSTEROL also found in pumpkin seeds. Beta-Sitosterol has been studied for its possible influences on reducing prostate enlargement or benign prostatic hyperplasia (*) as well as blood cholesterol levels.

Other rich sources of beta-sitosterol include pistachios, avocados and cacao. 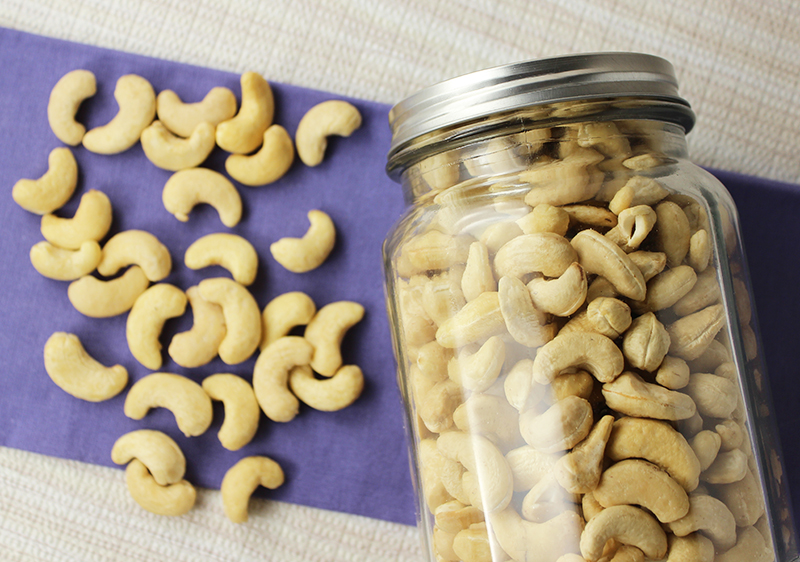 It's good to consume nuts, like cashews, in moderation and in healthy portion sizes, not more than 1/2-1 ounce. They can be an energy-dense snack food, just don't eat too many. When over-consumed they can be mucus-forming and their starch content can cause intestinal gas for some people.

While they're not a keto-friendly food, because of their high carbohydrate content, they are a great selection when making nut milks or a variety of raw vegan desserts, like cheesecake.

For the highest health benefits of cashew nuts, it is best to purchase and consume organic, unsalted, raw or lightly dry roasted nuts.

Soaking and straining cashews can remove some of their digestive inhibitors, but it also can reduce sweetness which may not be preferred.

Cashews should, of course, be avoided by those who have allergic reactions to tree nuts. Also, it's best to avoid cashews for those on a low-oxalate or ketogenic diet. Consult your nutritionist or health care provider before adding cashews to your diet if you are pregnant, nursing, are taking prescribed medications or have a serious medical condition. 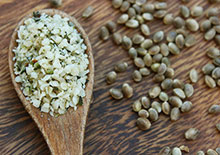 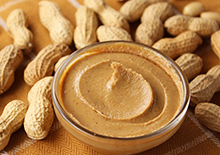 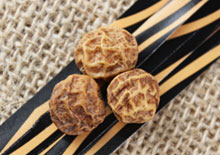 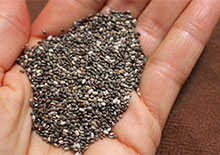