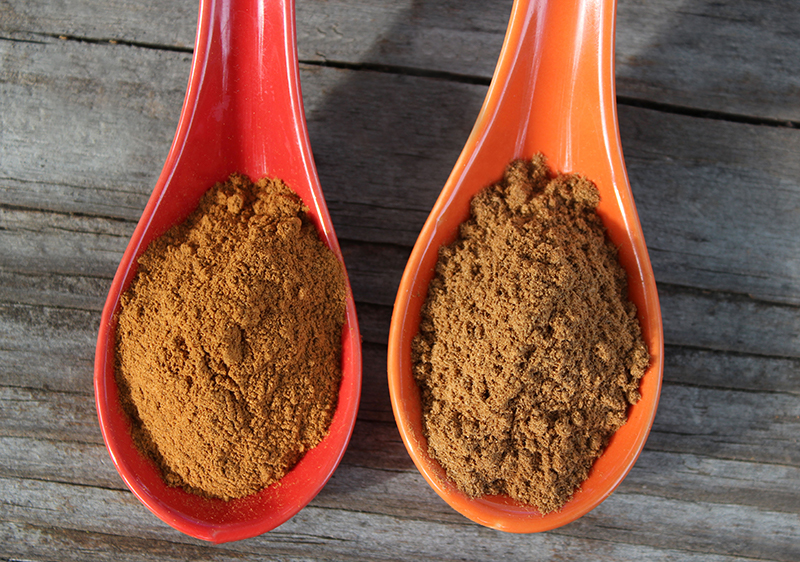 When it comes to cinnamon, you basically have two general spice options, Cassia vs Ceylon cinnamon. While cassia cinnamon is the household cinnamon spice common to most kitchens around the world, Ceylon cinnamon has grown in popularity in recent years.

Here are the major differences between the two so that you can decide which may be more or less appropriate for your individual uses.

Both cassia and Ceylon cinnamon come from the genus Cinnamomum.

But, while there is only one main variety of Ceylon cinnamon (Cinnamomum verum), there are several known species of cinnamon generically referred to as "cassia" cinnamon.

The three main commercial varieties include:

Indonesian, the most common variation sold commercially comes from regions like Sumatra and is less sweet with higher amounts of coumarin than Chinese cassia. It is lower in price compared to Chinese or Saigon.

The main one referred to as "Chinese cinnamon" is Cinnamomum cassia. This species is classified as a major tonic in Chinese herbalism and frequently used in the form of a bark or twig in herbal preparations with adaptogens like ginseng, poria, peony, dendrobium, licorice and many others.

Chinese cinnamon bark is graded according to its age and thickness. It is normally sold in whole thick pieces or large loosely rolled barks, depending on the harvesting procedure. Some of the exterior bark is often left on this variety. Premium grades are highly valued and considerably more expensive than those of a lesser quality derived from younger trees.

Vietnamese cinnamon or Saigon cinnamon, with its very strong flavor and aroma, is usually known for its higher quality over Indonesian Korintje cinnamon. It also consequently has a higher coumarin content. 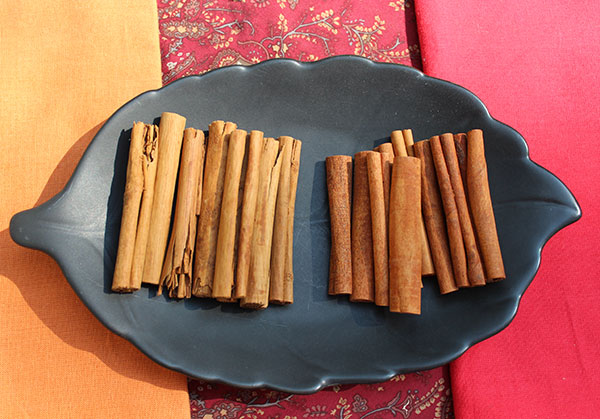 Ceylon cinnamon (Cinnamomum verum or Cinnamomum zeylanicum) is native to southern India and specifically the island Sri Lanka located off the southeastern tip of India. Sri Lanka was formerly known as Ceylon before 1972 and is where this type of cinnamon gets its name. This is also where Ceylon tea originates, a cultivar of the Camellia sinesis species. 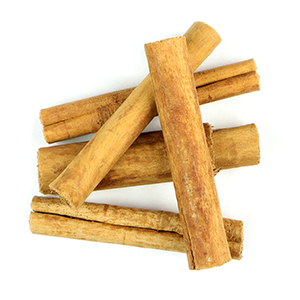 While it is still extensively cultivated in Sri Lanka, it has also been introduced to Madagascar, Brazil, Mexico, Central America and the Caribbean for commercial propagation.

The word "verum", from its scientific name Cinnamomum verum, is Latin for the word "true." This is one of the reasons it was originally referred to as "true cinnamon", not because cassia types aren't "real" cinnamon. However, this name is sometimes manipulated as a marketing device to make a claim of superiority over cassia variations.

Ceylon cinnamon sticks or "quills" are graded in Sri Lanka according to their diameter, which varies between 0.24 in (6 mm) - 1.3 in (33 mm). There are also about seven different cultivars that are identified by the taste of the bark. 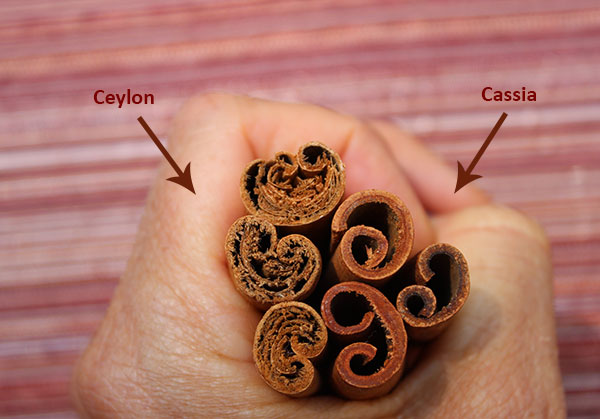 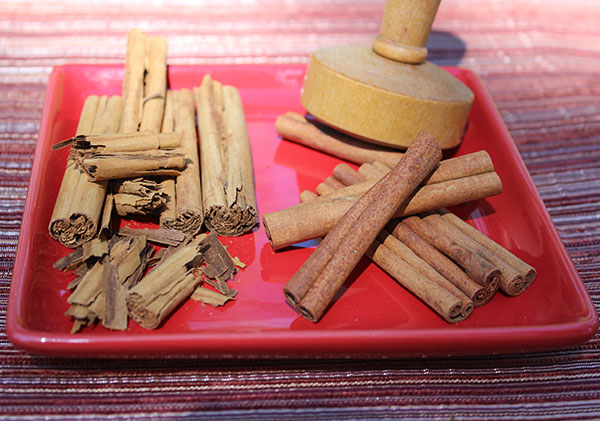 CASSIA - Cassia cinnamon types are a darker red-brown color, stronger tasting and produce a single-layered thick, hard bark that is difficult, if not impossible, to crush by hand. They are also known to contain a higher amount of volatile oil content as well as the compound coumarin.

CEYLON - The Ceylon species is composed of a softer thin bark with multiple layers that are easy to break. It is often called "sweet cinnamon" because it has a sweeter less pungent flavor compared to cassia varieties. The bark, whether in stick or powdered form, is usually a lighter red-brown color. Ceylon is typically a little bit more expensive than cassia, especially the common Indonesian cassia variety.

While both types of cinnamon have been found to have health benefits, cassia is known to contain more coumarin content. Coumarin is a natural plant substance and aromatic compound that is especially high in two main foods: cassia cinnamon and tonka beans. It is also found in a number of other foods, herbs and superfoods like celery, chamomile, green tea, clover, reishi and noni in lower amounts.

Coumarins exhibit anti-inflammatory actions and also possess strong anticoagulant properties and are thus the bioactive constituents found in certain medical drugs. For instance, the drug known as "Warfarin" or "Coumadin", is synthetically derived from dicoumarol (a derivative of coumarin) and is a frequently prescribed blood-thinning medication.

While in small quantities coumarin can be a health-promoting substance, it has also been demonstrated in some studies to have toxic effects on the liver and kidneys when consumed frequently in higher than normal doses. 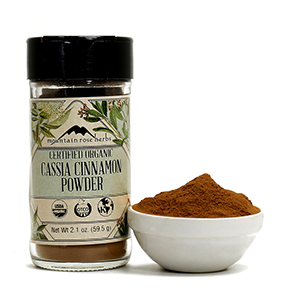 The average cassia dose, when consumed as a tea or herbal spice, is usually fairly low. However, when used as a concentrated flavored extract ingredient in various commercial foodstuffs or as a dietary supplement, these levels can go beyond the recommended safety precautions. Again, this is especially the case when daily intake is frequent and long-term.

According to the German Federal Institute for Risk Assessment (BFR), which currently have strict standards for the use of cassia cinnamon in food products, it is suggested that taking cinnamon capsules in the common amounts recommended for type 2 diabetes mellitus can exceed the normal spice consumption and increase safety risk. (*)

In one study published in The Scientific World Journal, it was identified that "Cassia cinnamon contains up to 1% coumarin, whereas true cinnamon (Ceylon) contains only a trace, about 0.004%."

While coumarin levels in different cassia varieties may vary, generally most experts propose that the safe daily dosage range of cassia cinnamon powder is between 1/2 to 2 teaspoons (1-4 grams) daily. Others recommend not more than 6 grams.

We actually measured cinnamon powder on a scale, just for greater accuracy, and one even teaspoon came out to exactly 2 grams.

In other research, analyzing coumarin levels in various cinnamon species, it was identified that Ceylon cinnamon had substantially less coumarin content than Indonesian and Vietnamese types.

The above amounts are general averages and may vary widely depending on the specific cinnamon source.

For those of you sensitive to coumarin intake or the harsher more overpowering flavor of cassia cinnamon, Ceylon might provide a better alternative. Visit our Ceylon page for more information about this type of cinnamon.

Another suitable option, if you'd like to receive the benefits of both Ceylon and cassia, is to use a combination of both powders or try a 3:1 ratio of ground Ceylon to Indonesian cassia.

Cassia cinnamon should be avoided by pregnant women because of its stimulating effects. Consult the advice of a medical doctor or healthcare practitioner when taking therapeutic doses if you are diabetic or are taking prescribed medications. Avoid daily consumption of cassia cinnamon, particularly in the form of a dietary supplement, if you are sensitive to coumarin or have liver disease or inflammatory liver disorders. Avoid high amounts of straight cinnamon if you are predominantly a Pitta body type.