Intro | What is Ginger? | Cultural Herbology | Dried Vs Fresh | Top 4 Benefits | How to Use | Precautions | Shop 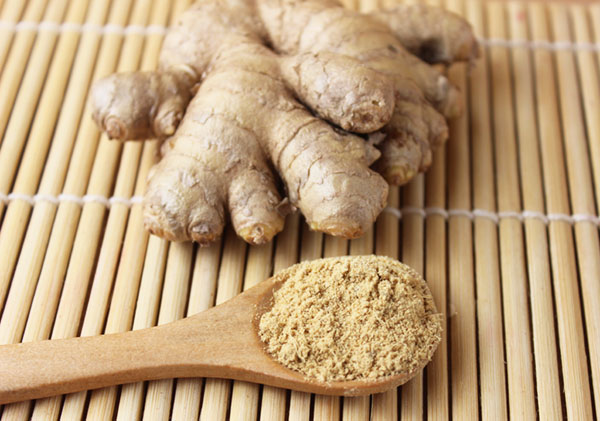 Ginger is a medicinal root-rhizome as well as a popular culinary spice indigenous to tropical locations ranging from India to Southern Asia.

It was in fact one of the first spices exported from the Orient, along with others like cinnamon and turmeric, during the spice trade and famed routes of world exploration.

It is still today one of the most freshly available spices sold on a global level. Consequently, most all cultures are familiar with its use as a dried powder or a fresh root and utilize its strong peppery slightly sweet flavor in numerous traditional foods and recipes.

Ginger, however, is not just useful as a dietary condiment for flavoring dishes but is also a pungent potent herbal ally to have in your superfood treasure chest as well as your spice rack.

Intro | What is Ginger? | Cultural Herbology | Dried Vs Fresh | Top 4 Benefits | How to Use | Precautions | Shop

Ginger or Zingiber officinale it not technically a root but a fleshy tan-skinned rhizome that grows horizontally above the soil, outward from the "pseudostem" of the plant. It is a reed-like perennial that comes from the same family as turmeric, cardamom and of course galangal, often referred to as Thai ginger.

The fleshy fibrous interior of the rhizome contains a yellow-golden juicy core that can be grated, chopped, minced, pressed, juiced or dried and ground as a powder. There are many variations of ginger unique to specific habitats and each have their own range of ginger-specific compounds and degrees of spiciness.

The most widely researched active constituents found in raw fresh ginger are the "gingerols", phenolic substances respected for their health-enhancing qualities. The amount of gingerol content is largely dependent on the preparation techniques employed. When ginger is dried it becomes more pungent, producing different beneficial compounds known as "shogaols." 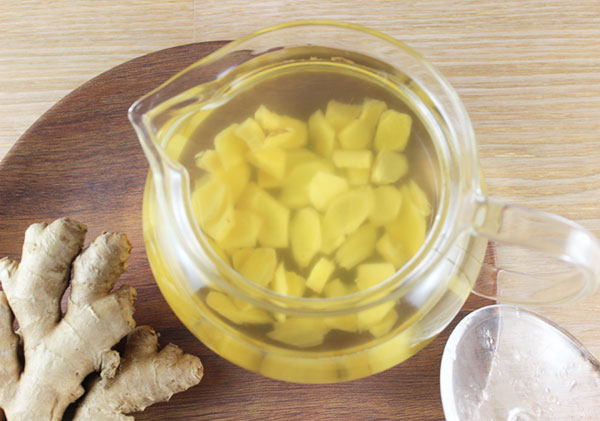 The benefits of ginger and its use as a therapeutic "herb" have been extensively employed in Ayurvedic, Asian and Western herbalism for centuries.

In Ayurveda, ginger is one of the three ingredients used in the traditional formulation known as Trikatu and its warming nature is believed to reduce both Kapha (cold, damp and phlegm-like nature) and Vata (cold, dry and gaseous nature).

According to the Yoga of Herbs, ginger is "perhaps the best and most sattvic of spices", called vishwabhesaj or "the universal medicine." In Ayurveda, Sattva is one of the three "Gunas" that is believed to offer very balancing qualities to both the body and mind.

In Traditional Chinese Medicine, ginger is thought to impact the stomach, spleen, lung and heart meridians and is specific for its ability to warm and circulate Chi (Qi) in the "middle burner", which controls the transformation of food solids and fluids into energy.

In Western herbalism, ginger is viewed as a stimulant, diaphoretic, expectorant, carminative, antiemetic and analgesic. 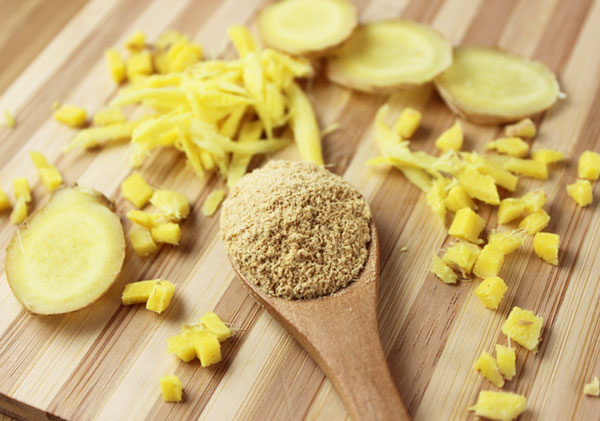 In both Ayurveda and Chinese herbalism, fresh and dried ginger is considered to have different qualities and effects.

The use of ginger root, in all its forms, has been utilized extensively throughout human history as a digestive aid. Mostly due to its heating nature, it is known in Ayurveda to activate one's "digestive fire" or "Agni", the ability to increase digestive capacity after consuming a meal. It subsequently works to improve assimilation and the transportation of nutrients so the body can effectively utilize foods ingested. 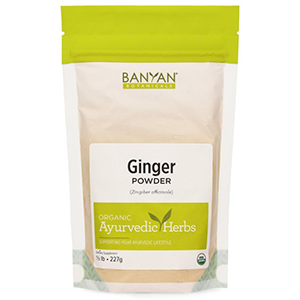 It is frequently incorporated into digestive bitter formulas, taken as a tea or type of aperitif before meals, or peeled and chewed raw to stimulate digestive juices, saliva production and to increase one's appetite.

Acting as a carminative, it helps to prevent bloating, decrease general indigestion, relieve gripping in the gastrointestinal tract and reduce flatulence. A cup of fresh ginger root tea can also be helpful after a meal for lessening such conditions and is particularly famous for its ability to alleviate nausea, providing soothing effects to those with abdominal discomfort, motion sickness or PMS.

Ginger and its natural spiciness is also beneficial for the digestion of fats and useful to integrate into high-fat meals or desserts.

2) Detoxifies Ama and Acts as an Antimicrobial

By increasing the power of digestion, fresh ginger can also simultaneously help to excite intestinal peristalsis, thus relieving constipation and the elimination of undigested waste material.

As an Ayurvedic herb, it is likewise considered to be one of the most useful for removing Ama or toxic accumulation in the digestive tract, frequently a result of poor dietary habits and/or low digestive fire. An excess of Ama is usually evident by a thick coating on the tongue.

Acting also as a diaphoretic, one of the benefits of ginger is that is helps to open the pores and induce sweating, which also assists in the release of toxins through the skin.

Fresh ginger is very useful during a detox protocol, in teas or when juicing raw fruits and vegetables, to further promote these lymph cleansing actions.

The antimicrobial and antiparasitic properties of both fresh and dried ginger root additionally work as a natural disinfecting agent as well as a potent immune booster.

Ginger, especially when consumed in juice or as a tea, provides effects as a non-caffeinated herbal stimulant by activating the senses and promoting what some herbalists like to call "the inner tingle." This is due in part to its heating influence which invigorates the entire circulatory system, increasing the flow of blood throughout the body.

Its ability to enhance digestion and metabolism also helps to prevent fatigue and physical sluggishness commonly caused after eating.

It has also been a valued herb in many folk traditions for its ability to stimulate sexual arousal by enhancing circulation and blood flow in the genital region. 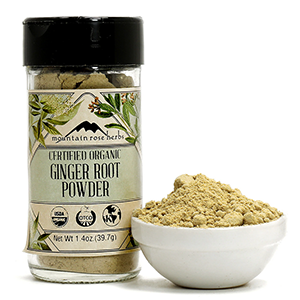 Dried and fresh ginger is often utilized as an "activating" addition to herbal tea preparations as it encourages the "activation" of other herbs incorporated, improving their effectiveness. Other spices like cayenne, cinnamon, long pepper and cloves have a similar quality.

Another renowned benefit of ginger is its usefulness at reducing congestion in the respiratory tract, which encourages easy breathing. Acting as an expectorant, it promotes the loosening, coughing up and expulsion of phlegm or mucus from the lungs and nasal passages as well as the stomach.

In some research, ginger and its active gingerol constituents, 6-gingerol and 8-gingerol, demonstrated bronchorelaxant properties, providing potential benefits to those with asthmatic conditions. Spicy ginger root teas have been employed worldwide in folk remedies for both acute and chronic respiratory related conditions.

Some of the health benefits of ginger are largely due to its therapeutic compounds like the mentioned gingerols and shogaols as well as paradols and zingerone, all of which provide antioxidant and anti-inflammatory properties. (*)

Subsequently, one of gingers most frequently claimed capabilities is its particular aptitude for reducing inflammation, pain and swelling, particularly in the joints. (*)

Many traditional Ayurvedic joint health formulas, like kaishore guggulu and yogaraj guggulu, in fact include ginger as an activating herbal ingredient.

In the scientific book review "Herbal Medicine: Biomolecular and Clinical Aspects", it was referenced that a dietary supplement using ginger powder for an extended period of time was shown to provide relief for pain and swelling in patients with rheumatoid arthritis or osteoarthritis. A dried ginger extract was also reported to offer "analgesic and potent anti-inflammatory effects."

Other research on the benefits of ginger for rheumatoid arthritis showed potential therapeutic effects at alleviating symptoms of arthritic pain.

In recent 2017 investigations, ginger was likewise identified to be comparable to Ibuprofen for its anti-inflammatory and analgesic actions. (*) 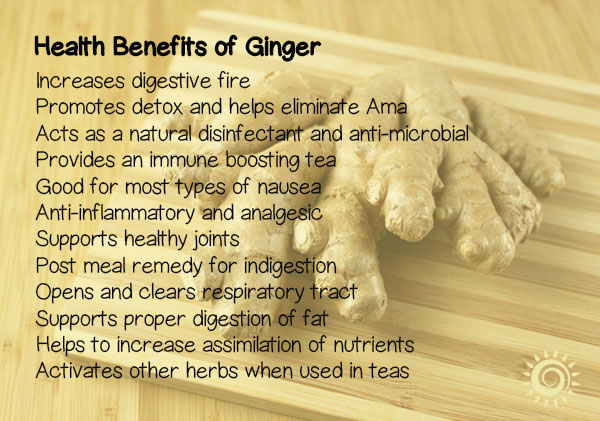 The benefits of ginger can be utilized from the fresh root, dried powder/pieces or as a dietary supplement available in capsule or tablet form.

Fresh ginger root or powder makes a delicious warming and energizing tea. It is usually prepared by most herbalists as a tea infusion using grated root as opposed to simmering it as a decoction. Infusing ginger believed to help preserve its volatile gingerol compounds that can be reduced with excessive heat.

Try ginger with turmeric in our golden milk recipe.

Likewise, ginger root can be grated, chopped, pressed and minced into many savory as well as sweet dishes.

Our favorite ways to use ginger are in herbal tea recipes, spiced masala chai, ginger lemon tea sweetened with honey, juicing recipes, cultured vegetables and of course incorporated into soups, curries as well as high-fat meals or desserts.

We also use it when making homemade pickled ginger, digestive bitters, fire cider, kimchi, kombucha candy and of course our dehydrated gingerbread cookies.

Ginger is contraindicated for Pitta (heat-related) conditions and cases of hyperacidity. Excessive amounts of ginger can by drying to the body and cause constipation, belching, heartburn in addition to hypertension and insomnia. Consult your physician or healthcare provider if pregnant, nursing, taking prescription medications or have a serious medical illness.