While most cooked recipes utilize hulled yellow mung beans or split mung beans, for sprouting purposes the whole unhulled green legume is the only type that will actually sprout. This is because the seed is still viable and contains living energy necessary for the sprouting process.

In recent decades, consuming these raw sprouts has become an increasingly popular way to eat them, usually served in small amounts atop meals or salads.

Compared to other bean selections, mung, lentil and green pea shoots create the best tasting sprouts and are considerably more digestible than sprouting other larger legume types, like garbanzo, black bean or pinto, which contain a greater amount of raffinose-type oligosaccharides or other complex sugars that can be difficult for the body to break down.

These harder beans, if not properly prepared, are notorious for causing digestive turmoil and flatulence producing side-effects and, in our opinion, should always be soaked, rinsed and cooked before consuming to neutralize and remove various "antinutrients" that inhibit their protein absorption.

Our #1 favorite way to prepare cooked beans, like garbanzo and black bean, is to ferment them as tempeh with a Rhizopus oligosporus/oryzae starter culture. This fermentation process considerably enhances flavor as well as nutrient profile and essentially predigests the proteins, making the amino acid content easier to assimilate.

Enzyme-rich fermented beans are also less likely to produce intestinal gas, since the tempeh cultures consume most of the offending sugars.

All raw beans and legumes also contain a natural toxin called lectin that is not good to consume in large quantities.

While lectins in beans, like mung, are significantly reduced after the sprouting process, they still contain small amounts and should be avoided if you have mild to severe gastrointestinal disorders or sensitivities.

According to research, the lectin content is considerably diminished when beans are thoroughly cooked after being soaked or sprouted.

What are Mung Bean Sprouts?

Green mung bean sprouts are not the long white bean sprouts commonly used in Asian cuisine, like spring rolls and stir fry's. The type we are referring to are the small white sprouts that still have the legume attached. Both are from the same legume or mung bean species (Vigna radiata), also spelled "moong" bean, but are created using different sprouting techniques.

Sprouted green mung bean is only sprouted for a 1-3 day period after the initial soaking process. Whereas white bean sprouts are produced over about a 7 day period employing specific methods to develop thick long juicy sprouts.

The green mung bean sprout has considerably more protein content than the white bean sprout as the protein-containing bean is still present.

Mung bean sprouts can be consumed raw or they can be cooked after a brief sprouting process which can help to reduce antinutrients.

Cultural Use of Mung Beans

Although the use of the raw mung sprouts is not as common worldwide, the cultural use of mung beans is widespread, especially in India, China and Southeast Asia.

The Vigna radiata legume species is believed to be native to India and is now extensively cultivated in regions where it is a staple food source.

Mung beans have been used in Indian cuisine for centuries and are a common Ayurvedic ingredient utilized to make kitchari, a spiced cleansing food often consumed exclusively for a number of days in a row to promote healing or as part of a panchakarma treatment.

Most types of moong dal are made with split or skinned mung beans, which usually turn an off-white to yellow color. However, the whole green mung beans are occasionally used in some dal recipes, like punjabi sabut.

According to our research, sprouted mung beans are also cooked and used to make dal and other traditional Indian dishes in regions of North and West India.

Mung beans, whether consumed as raw sprouts, cooked legumes or fermented as tempeh, can provide a great plant-based protein for vegans, vegetarians or those seeking to reduce animal meat consumption.

Green mung beans in their different forms contain similar vitamins and minerals, but ratios vary depending on how they are prepared.

Raw and cooked sprouts are shown to be higher in vitamin C and vitamin K and lower in protein and calories. By comparison, cooked whole unsprouted mung beans are significantly higher in folate, dietary fiber, protein as well as calories.

It is important to remember, however, that cooked unsprouted (and especially unsoaked/strained) beans may be harder to digest and thus may make the legume's nutrients less bioavailable.

In a 2014 published review analyzing mung beans, mung sprouts and their nutritional qualities, it was stated that "High levels of proteins, amino acids, oligosaccharides, and polyphenols in mung beans are thought to be the main contributors to the antioxidant, antimicrobial, anti-inflammatory, and antitumor activities of this food and are involved in the regulation of lipid metabolism."

Visit our super sprouts page for a list of other sprouting seed varieties.

In the same review, it was also reported that "In recent years, studies have shown that the sprouts of mung beans after germination have more obvious biological activities and more plentiful secondary metabolites since relevant biosynthetic enzymes are activated during the initial stages of germination. Thus, germination is thought to improve the nutritional and medicinal qualities of mung beans."

As with other types of sprouts, raw mung bean sprouts are also a rich source of natural food-based enzymes, which is not the case for cooked varieties. Consuming them alongside cook meals or harder to digest foods can help to increase digestion and preserve one's own digestive enzyme resources.

Mung bean sprouts are sprouted in much the same way you would initially jar sprout other types of sprouts like broccoli, alfalfa, fenugreek and onion, or when preparing microgreens like sunflower or purslane before they are placed on a tray or growing medium.

The length of time it takes to sprout them is fairly short, usually about 1-3 days depending on how you plan to eat them. For consuming raw sprouts, we recommend sprouting them for at least 2-3 days, which will produce a white sprout that is about 1/4-3/4 of an inch long (or .63-1.9 cm).

If you're going to cook your mung sprouts, it is best to sprout them for only a brief one day period, just after the sprout emerges from the seed. This provides a better flavor after the beans are cooked.

How to Sprout Mung Beans

To sprout mung beans you will need a one-quart glass jar, a mesh sprouting lid and 1 1/2 cups of whole green mung beans (preferably organic). This will produce a little under a quart jar of mung bean sprouts.

(For more on sprouting specifics see our sprouting seeds or how to sprout pages.)

Commercial mung beans are usually grown in either India or China and are exported to other countries around the world. We have, however, found a good source of organic mung beans cultivated in California, which may be preferred for those living in the United States.

Mung bean sprouts can be consumed in small amounts as a raw sprout variety atop salads, soups or most any raw and cooked meal. They can likewise be added to wraps, tacos or sushi rolls.

We used them in our vegan pad thai and seaweed salad recipes as an added protein source.

Cooking mung beans, either slightly sprouted or unsprouted (but soaked and strained), takes a lot less time to prepare than other types of beans, usually between 1-1 1/2 hours total cooking time.

They are delicious when cooked and prepared as a sprouted mung bean dal with curry, turmeric and other Indian spices.

Mung beans, when slightly undercooked, can additionally be prepared as a homemade tempeh that can be sliced, grilled, stir-fried or served in miso soup.

Another Way to Eat Raw Legumes

In recent years some experimentation with fermenting raw soaked or sprouted bean paste for a 24 hour period has been popularized by those adhering to a raw food diet.

To date, we have only achieved some success using sprouted mung beans and lentils. This process is accomplished by lacto-fermenting a combination of ground sprouted legumes and chia or flax seed with a probiotic powder for one day or overnight. The end result can be spiced and dehydrated as burgers, taco meat or falafels.

This removes much of the less palatable raw sprout flavor and provides a tasty cooked bean alternative.

Raw mung bean sprouts should be avoided by those with digestive disorders, weakened immune systems or those sensitive to small amounts of lectin or phytoestrogen content. Of course, avoid if you have allergies to legumes. 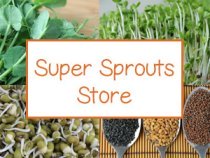