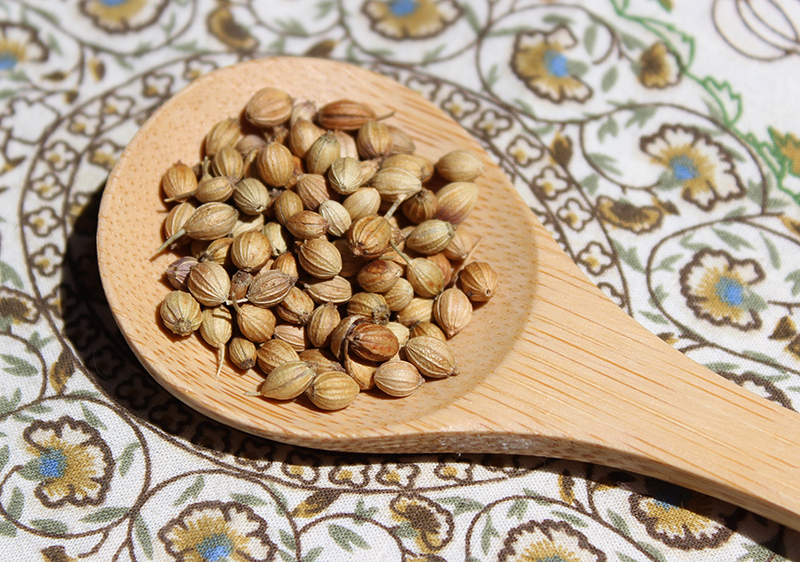 Coriander seeds are the dried fruits of the cilantro plant species Coriandrum sativum which comes from the celery, carrot and parsley family along with other popular spices such as caraway, dill, fennel and cumin.

Coriander is considered one of the ancient spices cultivated by early Egyptian and Mesopotamian civilizations located in an area identified as the Fertile Crescent. As such it has had a long cultural history of herbal and culinary use.

Here is our top 10 list of traditional coriander seed uses known throughout the ages.

Coriander seeds, commonly referred to as dhania in Hindi, have long been utilized in Ayurveda to neutralize heat or Pitta conditions.

That's because ground coriander is one of those seed spices like cumin that promotes a COOLING ACTION on the body due to its predominant bitter-sweet qualities. It can have a soothing impact on the GI tract and might be a nice go-to herb for heat-related excess associated with menopause.

Served as an herbal ingredient in iced lemonade, it can provide a refreshing summertime drink.

2) Influence as an Herbal Energizer and Relaxant

Coriander seed is an aromatic stimulant that can naturally enhance energy when used in small doses.

This may be in part due to its strong volatile essential oil compounds that act as antioxidants. The main one called LINALOOL, also known as CORIANDROL, accounts for the seed’s pleasant floral aroma and lemony citrus-like flavor.

However, according to some sources, the seeds are likewise considered to have tranquilizing properties as a relaxant if taken in large amounts.

Unlike caffeinated stimulants, plant-based herbs like ground coriander can offer supportive balance to the central nervous system rather than promote depleted states.

Consumed as a spice condiment with meals or as a straight tea, coriander seed is a good one to keep on your list for such traditional uses. 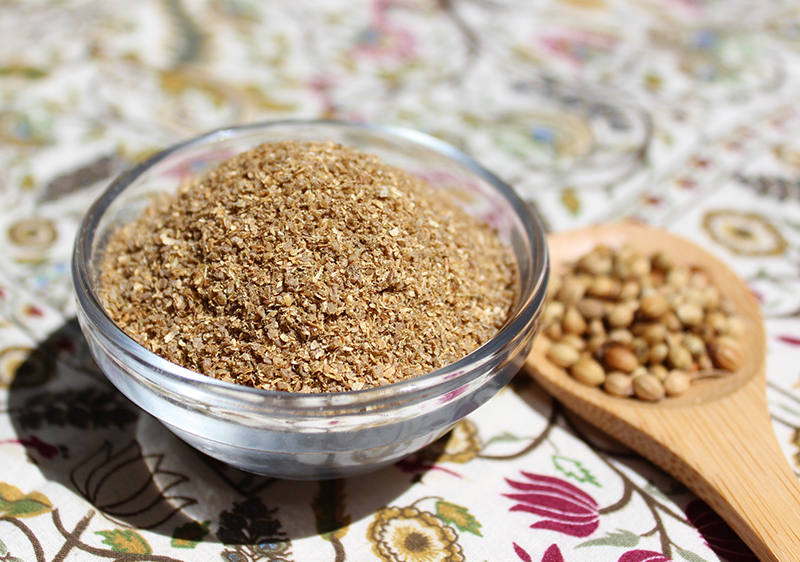 The seeds of the coriander plant have long been used by ancient Ayurvedic practitioners for their benefits to the digestive system. Their slight pungent qualities are valued for encouraging healthy digestion and assimilation of nutrients as well as detox processes. 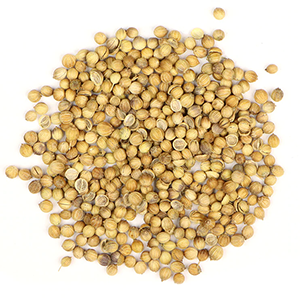 Consuming coriander seed and powder does this by stimulating digestive juices and strengthening "digestive fire" without increasing heat or aggravating Pitta constitutions.

Famous in the Ayurvedic three spice tea blend referred to as CCF Tea, a combination of Cumin, Coriander and Fennel seed. CCF Tea is used to balance digestion and normal breakdown of "ama" or natural toxins.

Ground powders also make a great addition to a kitchari spice blend when undertaking a dietary cleansing protocol. This cleansing aspect goes along with coriander seeds' claimed benefits for weight loss. Like cumin, it is prepared as a cooled tea called "dhania water" for such purposes.

4) Popular For Use in Curry Powder

Ground coriander is used in preparing various dishes worldwide and is a traditional ingredient in East Indian curry powder blends. 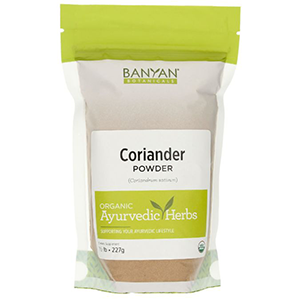 This is because it has a variety of unique flavors and offers a balancing component to many of the heating spices.

The rounded ball-like seeds are sometimes dry roasted, along with other seed spices, to intensify the taste. When making homemade curry powders it is best to freshly grind seeds like fenugreek, cardamom, cumin and coriander for the greatest flavor profile.

Likewise, coriander is an integral component of garam masala as well as the powder blend called dhania jeera, which consists primarily of roasted coriander and cumin seeds.

5) Common Use as a Pickling Spice

Coriander seeds are a popular ingredient in pickling spice blends, along with cloves, pepper, mustard, allspice and bay leaf.

Other umbellifer seed spices, like coriander, that are classified by their umbrella-shaped lacey flowers include dill, fennel and caraway. These seeds are also favored when pickling vegetables or making homemade sauerkraut.

6) May Offer Support to Urinary System

The seeds of the coriander or cilantro plant have been acknowledged for centuries as a diuretic in herbal pharmacopeia and for their support to the kidneys and urinary system. This also coincides with its cooling actions and adjunctive use in folk traditions for urinary tract infections.

7) Use as a Meat Preservative and Flavoring

Since ancient times, the seeds of coriander have been utilized for their antimicrobial qualities that aid in the preservation of meats.

The essential oils in the seeds or ground powders inhibit meat-spoiling organisms and help to prevent animal fat rancidity. Today, they're widely used to spice sausages as well as many cultural meat-based dishes. 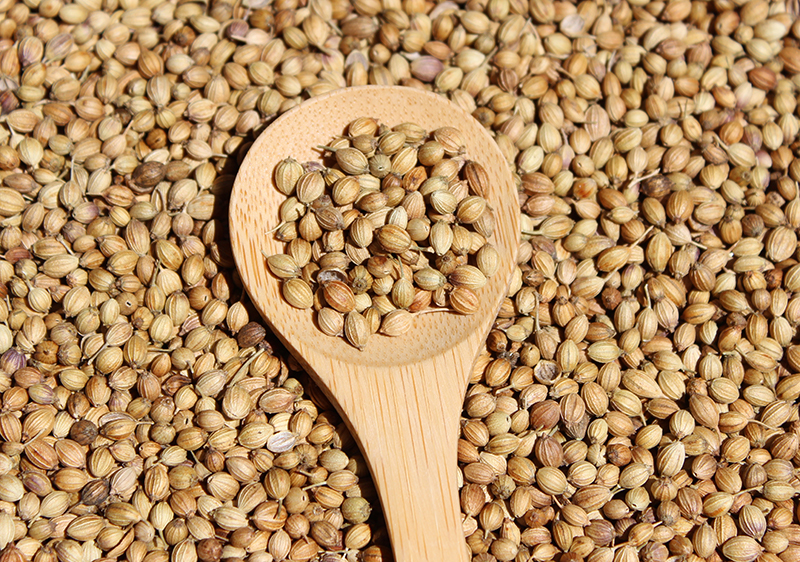 Historically coriander has been used as a carminative to ease discomfort caused by intestinal gas. The powder or crushed seeds are commonly brewed as a tea with fennel, anise seed or star anise which is consumed after or between meals. (Source)

Coriander has a long history of use as an ingredient in brewing beer in certain parts of Europe. The seeds are also used to flavor alcoholic drinks and are likewise popular in herbal liquors like gin and absinthe.

Coriander has a rich history of magical symbolic uses. The plant is claimed to invite peace and love and can be helpful during a grieving process.

It is believed to be energetically uplifting and intellect sharpening. Chewing on a coriander seed is said to heighten psychic abilities.

How to Make Coriander Seed Tea

Coriander tea (or dhania water) is best when made with dried whole coriander seeds or freshly ground powders. To make the tea, infuse half a teaspoon of the powder OR one teaspoon of whole slightly crushed seeds into one cup of hot water. Allow to steep for 15 minutes.

You can purchase high-quality dried organic coriander seeds or powders from suppliers like Mountain Rose Herbs and Banyan Botanicals, two of our personal favorites.

Some individuals may experience allergies to coriander seeds or members of the parsley family. Consult your health care professional before using this spice if you are pregnant, nursing, taking any medications or if you have a serious medical condition. 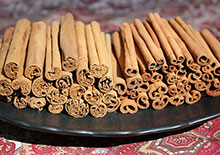