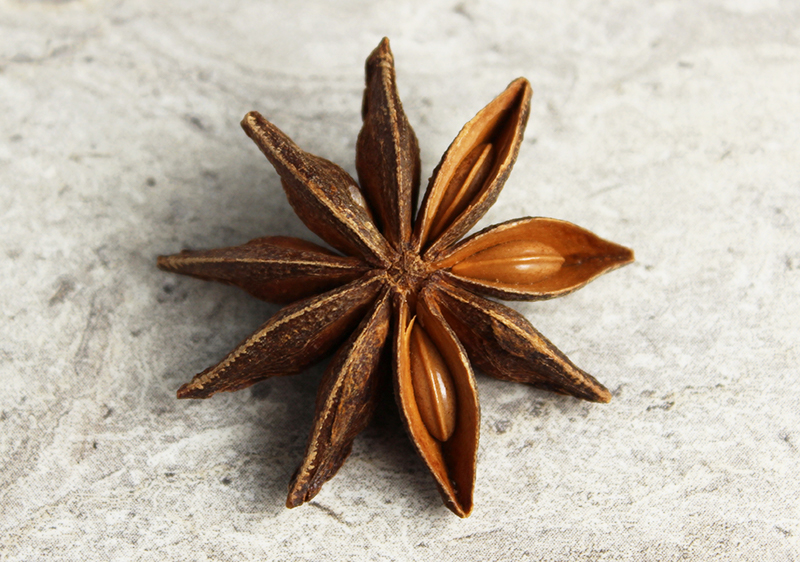 Star anise, recognizable by its unique star shape and very robust aromatic fragrance, comes from the fruit of the tree species Illicium verum.

It is not actually related to anise seed (Pimpinella anisum) but does contain one major overlapping compound and that is ANETHOLE. This is one of the main flavorings in anise seed as well as licorice root and fennel seed, known for its distinctly sweet taste.

Star anise is from the Schisandraceae family more closely related to schizandra than anise seed.

Anise seed comes from the family of umbellifers like other herbs and spices such as dill, celery, parsley, fennel and coriander. Star anise compared to anise seed is often described to have a stronger bitter-sweet taste and hotter energy.

Star anise star-point pods and the seeds enclosed within them both work to provide a unique flavor profile that's often likened to black licorice.

When we sampled both the shiny brittle seeds and the tough outer pods individually, they both had a subtly different taste. It is their combination that provides for the most dynamic flavor.

They are frequently used whole, in pieces or as a ground powder in herbal teas and concoctions. When unground, they can be strained and utilized multiple times in tea infusions. They work very well as herbal flavor enhancers for adding body and depth to many formulations and botanical recipes.

Also called badian or Chinese star anise, the seed-filled fruit pods are picked and dried before ripe to capture their most intense flavor.

Believed to be native to regions of southern China and Vietnam, star anise is an ingredient in the traditional Chinese five spice blend which includes all five flavors. This combo includes star anise and four other spices including cloves, cinnamon, pepper (usually Sichuan) and fennel seeds. 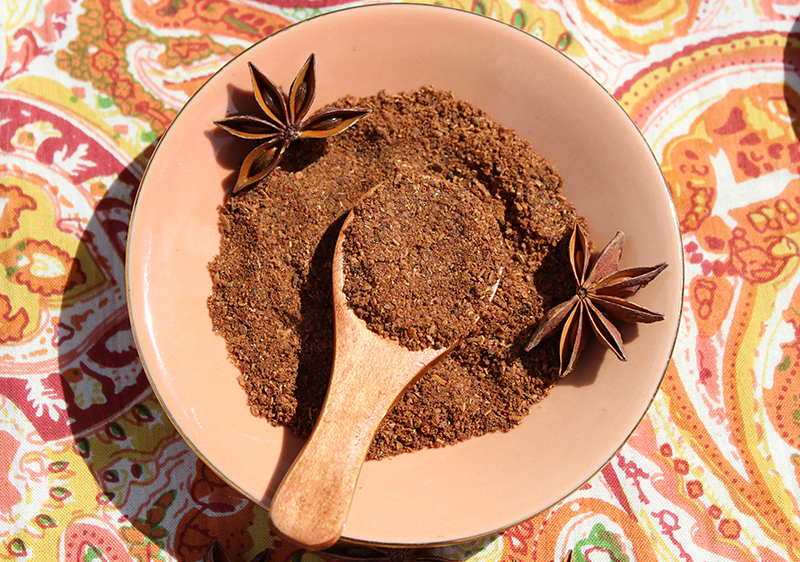 Yes, star anise is a significant source of the compound known as SHIKIMATE or SHIKIMIC ACID.

Shikimate has been discussed in recent times because of its association with its claimed supportive influence on the vascular system and for its reviewed antiviral potentials. (*)

While the science is still inconclusive, plant-based sources of shikimic acid have been used as supplemental botanical allies for such purposes. Star anise is commonly regarded as the highest natural source (*), but other herbs often employed for their shikimate content include schizandra, St. Johns wort, fennel and certain non-toxic pine needle species.

Illicium verum can be prepared as a tea, tincture or herbal syrup. Some health seekers and herbalists even pack freshly ground star anise into an espresso machine to extract the herb's potent properties.

Star anise has been historically utilized by herbalists for its actions as a carminative, stimulant and diuretic herb. Its high anethole content has also made it very popular for respiratory support. (*)

As a warming stimulant, it encourages circulation as well as acts as an expectorant, commonly used in DIY herbal syrups, cough drops and throat sprays. In the same regard, it is known to assist the "flow of Chi (Qi)", disperse cold energy and influence anti-inflammatory actions in Chinese herbalism. 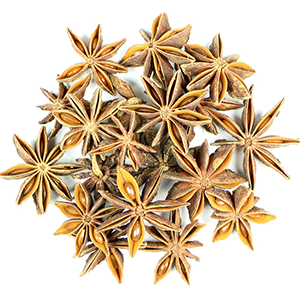 One of the most widespread uses of star anise tea is to soothe an upset stomach and digestive discomfort. To make a quart of tea, crush or infuse directly 2-3 whole pods into hot boiling water for 10-15 minutes or simmer on low heat for about 5 minutes. Strain out the herb before consuming. Or, about 1/4t of star anise powder can simply be infused and strained.

Anethole is likewise the main component responsible for its antimicrobial and antiseptic properties. Along with anethole and shikimic acid, star anise is known to contain linalool, carryophyllene, limonene, gallic acid and quercetin. These are all components that contribute to its many healthful qualities, most acting as antioxidants.

In many folk traditions around the world, star anise is on the list of "kitchen spice medicines" like others such as clove bud, cinnamon and turmeric. 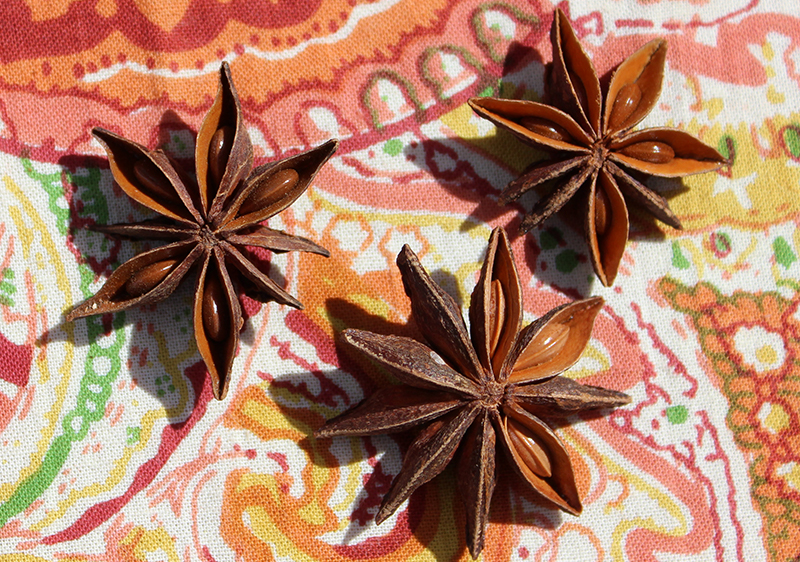 Star anise is widely used as a culinary spice in Asian cooking for both savory meals in addition to sweet foods. It is known to enhance the flavor of meat protein and its sweet and strong flavor goes very well in many desserts.

Star anise and its licoricey taste is an integral spice in Malay, Indonesian, Chinese, Vietnamese and Indian cuisine. It is utilized in many types of soup broths and is sometimes an ingredient in garam masala recipes.

It is used in chai tea, mulled wine, homemade preserves and is often a quintessential spice used in many sweet herbal liqueurs. 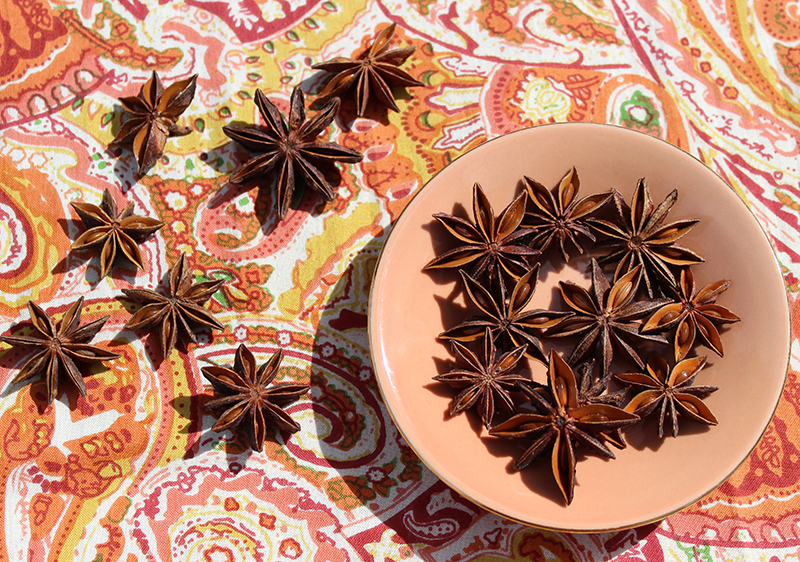 Star anise is usually used in small amounts because of its powerful taste that can easily overtake a recipe.

Dried whole pods or pieces can be incorporated into broths and sauces. Generally, they are removed afterward as they are too tough to chew on.

Star anise powder is sometimes more convenient but can be slightly less potent depending on how fresh it is.

Always store this spice in an air-tight container in a cool location to preserve the highest flavor profile.

For herbal preparations, it can be utilized in tinctures or when making herbal teas. It is a great one to incorporate into a nut milk recipe or shake elixir.

It is best to avoid excessive intake of star anise, especially during lactation or pregnancy. Consult your physician before adding star anise to the diet if you have a serious medical condition or are taking any medications.