What is Nutmeg? | Nutmeg Vs Mace | Where is Nutmeg From and Grown? | Psychoactive Properties | Folk Uses | How to Use | Precautions | Shop 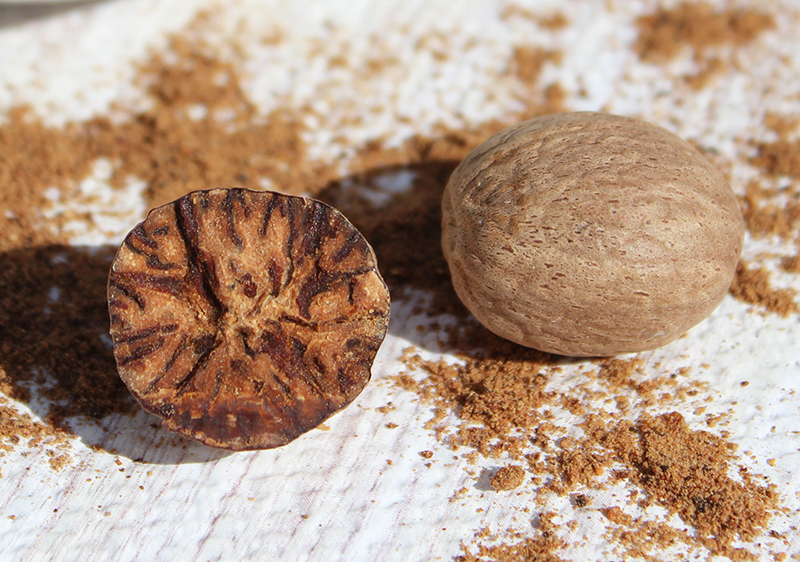 Nutmeg is the seed of a small fruit that grows on the Myristica fragrans evergreen tree species. When the fleshy husked fruit is mature, it splits to reveal the hard brown unshelled seed kernel wrapped within an orange aril.

Nutmeg is full of essential oil compounds, channels that are visible when cut in half, which give its spice powder a very strong perfume-like fragrance and unique pungent nutty sweet taste.

What is Nutmeg? | Nutmeg Vs Mace | Where is Nutmeg From and Grown? | Psychoactive Properties | Folk Uses | How to Use | Precautions | Shop

One of the unique features of the nutmeg tree is that it’s one of the only spice varieties to give us two spices for the price of one. Nutmeg and mace. Mace is the lacy protective covering surrounding the oval nutmeg shell and is removed to produce the spice powder called mace.

When the shell is cracked open, there you will find the nutmeg seed.

Whole mace pieces are referred to as "mace blades" which are usually an orange-red to orange-yellow color depending on where the tree is grown. While mace does have a nutmeg-like taste, it's not as sweet and also has a sharp flavor profile resembling coriander, black pepper and pine. The term "mace" has no relation to the mace used as a self-defense spray. 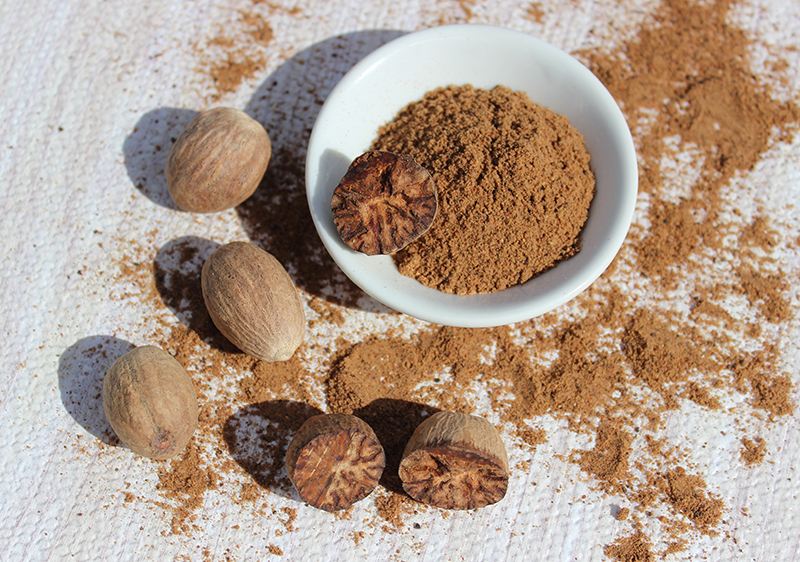 3) Where is Nutmeg From and Grown Today?

Nutmeg is indigenous to the Banda Islands, within a territory historically called the "Spice Islands" or Moluccas located in eastern Indonesia. This region is also home to cloves and the clove tree species Syzygium aromaticum. 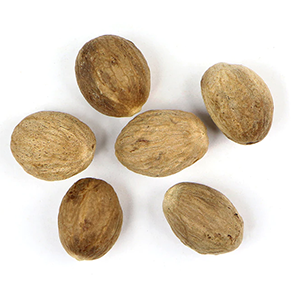 Nutmeg, mace and cloves, up until the mid-19th century, were the subject of a series of battles known as the "Spice Wars". This was a time when different powerful spice merchants sought to dominate these lands and this once very profitable industry.

Nutmeg is the significant export crop of Grenada, which is confirmed by nutmeg fruit's depiction on the islands national flag. Other minor nutmeg-producing countries include India, Sri Lanka, Papua New Guinea, Penang Islands as well as other parts of the Caribbean. 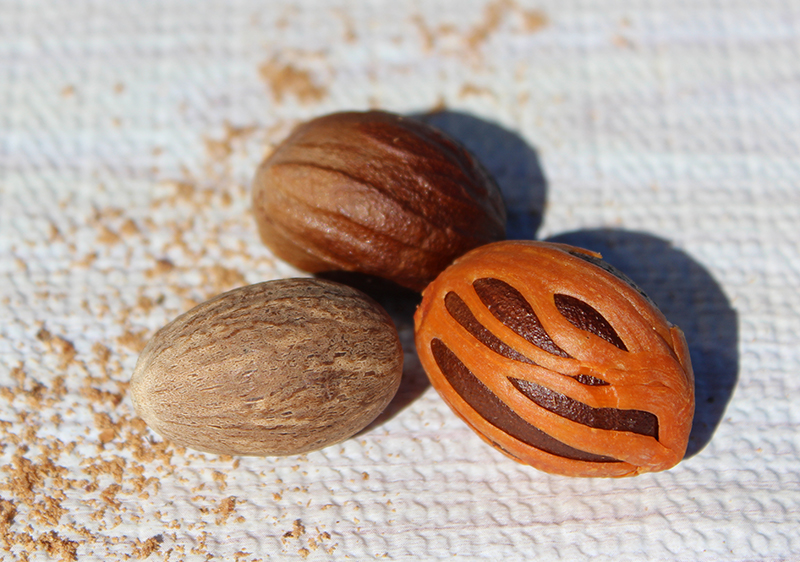 Nutmeg is one of those spices that should be used cautiously in small amounts. This is because excessive intake of this spice is known to cause a psychoactive influence with potential side effects including dizziness, mental confusion, dry mouth, nausea and vomiting.

This is due to its very high content of the MYRISTICIN compound, which is also found to a much lesser degree in other herbs and spices like dill, parsley, celery seed, anise and black pepper. A high-quality nutmeg can average about 13% myristicin of total nutmeg oil content, one of the highest of all spices.

Myristicin is toxic to the central nervous system and liver when abused and/or used in very high quantities.

According to some science, psychoactive effects can develop after 10 grams of ground nutmeg intake. However, a minimum of 5 grams of nutmeg consumption has likewise shown to induce this response. In addition, two other constituents such as elemicin and safrole, may also contribute to this overall effect.

Myristicin is a double-edged sword. While in low doses, it is considered an antioxidant and antimicrobial substance (*), in high amounts it is toxic (*).

Although quantity can vary depending on individual sensitivity levels, typically it is safe to use between 1/4-1/2 teaspoon in recipes or as a grated garnish topping when overall portion intake is relatively insignificant.

Nutmeg, along with many of the aromatic spices, such as cardamom, cloves, allspice and cinnamon, is also researched to be high in volatile oils, triterpenes and phenolic compounds. These are the constituents that can offer some health-promoting benefits most notably for their antioxidative, anti-inflammatory and antimicrobial influences.

Some of the primary components in nutmeg include the mentioned myristicin, safrole, and elemicin but also sabinene, pinene, terpineol, eugenol and limonene in addition to catechins and caffeic acids.

Nutmeg has been widely used historically as a digestive aid and stimulant. In some folk traditions, small quantities of warming nutmeg spice added to tea, hot water or warm milk has been used for indigestion, nausea, rheumatism, anxiety and stomach cramps.

More recently there are many claims that nutmeg may offer support for a more restful night's sleep. This is primarily due to some researched observations on mice whereby nutmeg essential oil and the myristicin, 4-terpineole and safrole compounds were identified to have a sedative influence, inhibiting locomotor activity.

We have personally experimented with using a small dose of nutmeg powder as a bedtime tea and did notice slightly improved sleep patterns when used for a few days. However, it might be a better option to include it in a sleep tea formula with other sleep support tonics like ashwagandha, jujube and reishi. 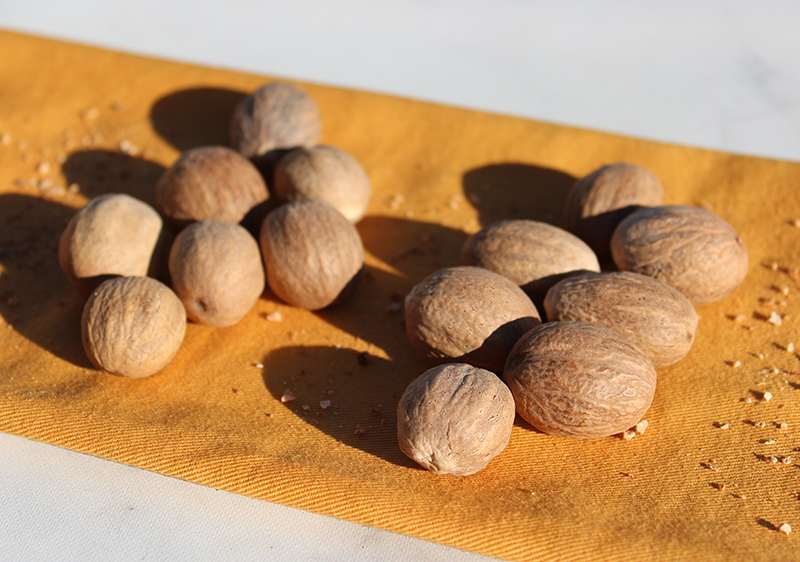 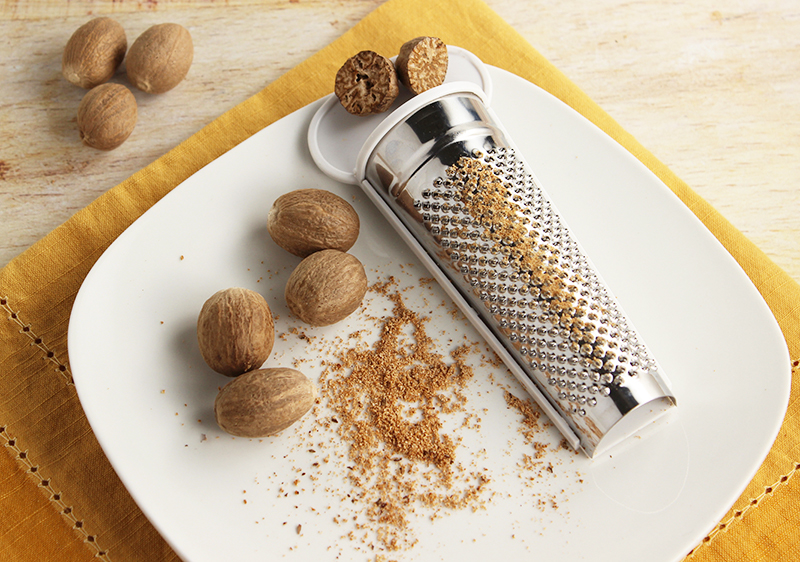 6) How to Use Nutmeg Spice

Nutmeg with its unique nutty flavor is very popular for use in dessert recipes. It is a key ingredient in pumpkin pie spice as well as gingerbread, apple pie and rice pudding.

It is frequently combined with other spices in curries, chai tea, mulled wine, cider or as a topping for many festive drinks like eggnog.

Because whole nutmeg loses its potency quite rapidly after it is powdered, it is often ground fresh using a nutmeg grater specifically designed for such purposes. Again, a little bit goes a long way when it comes to nutmeg's strong taste and usually less is used compared to other incorporated seasonings.

Another less popular way to use nutmeg powder is in herbal formulations as a stimulating carrier to encourage the uptake of other herbs used.

Nutmeg should be avoided in large amounts as it can cause unwanted side effects. Nutmeg spice powder may cause allergic reactions and/or contact dermatitis, it should not be used on a regular basis. It is generally recommended to avoid nutmeg during pregnancy or when nursing. Consult your physician before using nutmeg if you are taking medications or have a serious health condition. 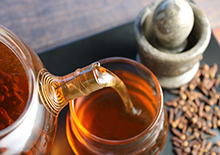 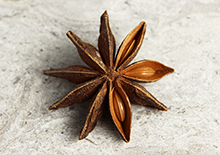